One of my favourite treats that are sold around Easter time are chocolate covered marshmallows, which are usually shaped in the form of an egg. I wanted to make marshmallow eggs this year but didn’t have time enough, however I know how to go about it now so that I can do it next time. (I detail how to do this later in the post.)

These marshmallows are made with my basic recipe and as soon as the marshmallow has thickened, it sets fairly quickly unlike marshmallows made with refined sugar and corn syrup (there’s a scientific reason, I know, but I won’t get into it here) so it’s important to not overwork it otherwise it sets as it’s being whipped and you won’t be able to mold it; essentially marshmallow fluff. (This, however, I found is easily rectified by simply putting the marshmallow mass into a pot and gently heating it while stirring until it starts to melt. Once there, pour into the pan and allow it to reset.)

To coat the marshmallows in chocolate, you must temper the chocolate. Over the years I have read several texts, including blogs, about tempering chocolate but I only just learned how with the instructions from Roald Dahl’s Even More Revolting Recipes, which, for me, best described how to do it in a straightforward manner. I was well pleased with this accomplishment, especially as this was my very first time to temper chocolate!

END_OF_DOCUMENT_TOKEN_TO_BE_REPLACED

For Japan, I made paper cranes and matcha green tea marshmallows.

Green tea is a large part of Japanese culture. There are several types of green tea based on how the leaves are grown such as climate, growing period, etc. that ultimately affects the cup of tea brewed and how it is used; for example, matcha is traditionally used in and prepared for tea ceremony. Matcha is also a popular ice cream flavour.

Because of the matcha powder, these marshmallows are more on the side of bittersweet. The green tea flavour would pair beautifully with white chocolate, an idea if you can have dairy and sugar. I’ve yet to see a dairy-free white chocolate, let alone sugar-free.

If you like marshmallows but don’t enjoy their often toothachingly sweet aspect, these could be for you. (My previous marshmallows are far less sweet than store-bought and most recipes, but some people’s tastebuds are more fine-tuned to sweetness than others; not to mention personal preferences.)

END_OF_DOCUMENT_TOKEN_TO_BE_REPLACED

It seems like we’re experiencing one of the hottest summers ever, worldwide. I made marshmallows hardly a week ago, so it would seem, to me, to put another marshmallow recipe on here so soon a bit crazy. I had no desire to try making marshmallows with honey again, because of my experience with past, failed endeavours of trying to make SCD marshmallows and also that I’d become convinced, in such a short time, that agave nectar had something over honey. As the mercury slowly climbed up, I hoped that these marshmallows would work. (A side note: I hope to use a digital candy thermometer someday, rather than one with mercury, which is dangerous.)

I changed my mind about making marshmallows with honey after a reader’s comment. Rather than respond immediately, it took me four days (!) to reply, because I wanted to speak from experience and know for sure that honey would indeed work as well as agave nectar. In my response, I also acknowledged that maple syrup could work, though I’ve yet to try. When I do, I imagine that I’ll surely be doing another marshmallow post. Egads! Is there any other food blog out here that has more than one marshmallow recipe? If you didn’t know me better, you might think I had an obsession with marshmallows. 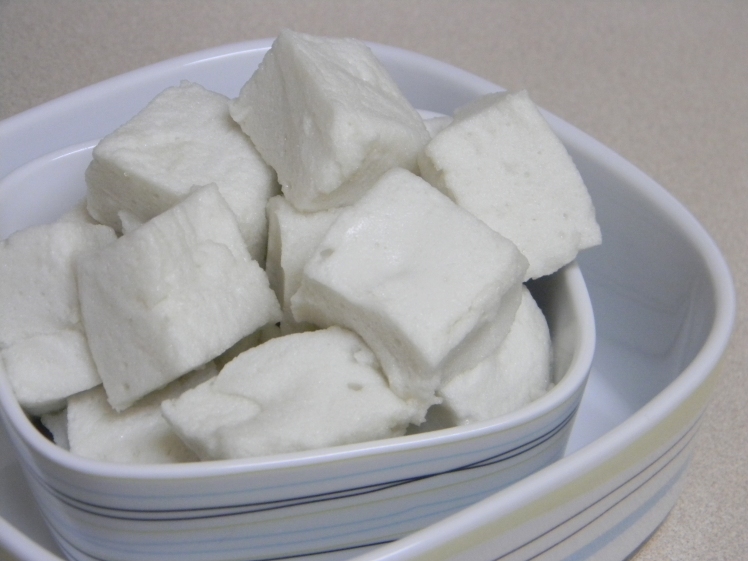