The other day I Googled “gluten-free baking powder biscuits” and simply “gluten-free biscuits” and found that my post was the first search result. I posted that recipe back in February of last year and while it’s a recipe I should be satisfied with, the truth is I wasn’t. I was satisfied and happy with it at the time I’d posted it, but one of those quirks that happens with some recipes that you make frequently enough, you may start noticing kinks and they frustrate you.

I sometimes get nervous because I know people are actually making the recipes I post, whether they’re original or adapted from another source. (Nervous at the prospect that they could be making an older recipe I’ve since improved – I am of course pleased when others make the recipes I’ve posted here!)

With this in mind, I’ve posted these biscuits with my recent modifications to the recipe, which I walk through in this post before giving you the recipe with some step-by-step photos. The recipe given will make less as seen in the photos – I was making a double recipe that day.

Since I make these biscuits so often, going along and tweaking the recipe was generally easy. The first tweak I made was when I added an extra half teaspoon of baking powder. As with all recipe modification and testing, it’s better to make small improvements and build it up from there. The two major changes I made were with the cornstarch and xanthan gum.

Cornstarch: My original recipe used 120 grams cornstarch, which is nearly a cup. When used in baking and depending on what you’re going for, cornstarch can help make baked goods or desserts delicate or tender, as well as help create crustiness. While the biscuits were soft inside, the exterior was sometimes slightly crusty, and I didn’t remember the wheat ones having that quality. Of course, it is always muddy waters when we try to recreate something from our memories as a detail might be missed or over the years, the memory has changed – keeping in mind, also, back in the day I generally didn’t take photos of food. Not to mention, I was also making dietary modifications.

Cutting back the cornstarch by a quarter and using the increased amount of baking powder, the biscuits were softer and, I thought, had a lighter crumb, without losing any of its structure. I still felt improvements could be made, however, since this sort of crust had not really changed – then I considered the xanthan gum.

Xanthan gum: Xanthan gum is used in gluten-free baking to mimic gluten’s elasticity. When baking with wheat flour, there are often instructions warning not to mix it too much or the gluten’s elasticity will be stretched too much (activating the gluten) and the resultant baked good will be tough or dense. (I never baked enough as a hobby to learn this on my own before we switched to gluten-free. I only know this from reading enough food science books and articles, print and online.) While we don’t have to worry about this factor with gluten-free baking, I started to wonder if the xanthan gum could be the culprit. Gluten-free baked goods with a gummy texture is the most common problem encountered when using xanthan or guar gum improperly, though if these gums are used to mimic gluten’s elasticity, couldn’t too much also produce similar results of overworking dough made with gluten?

I scaled back the xanthan gum by half a teaspoon, now using only one teaspoon, and the resultant biscuits were better. Yes, the exterior was slightly crusty but it wasn’t tough and the biscuit was overall softer. I didn’t have to pop them back in the oven for another five or ten minutes like my first recipe, either. (Sometimes the biscuits before would be slightly raw.)

Conclusion: The original recipe is still fine, however I think these ones are better. The biscuits made with the original recipe weren’t bricks, but they did sometimes feel like they just sat in one’s stomach after eating them whereas these ones do not have that quality. 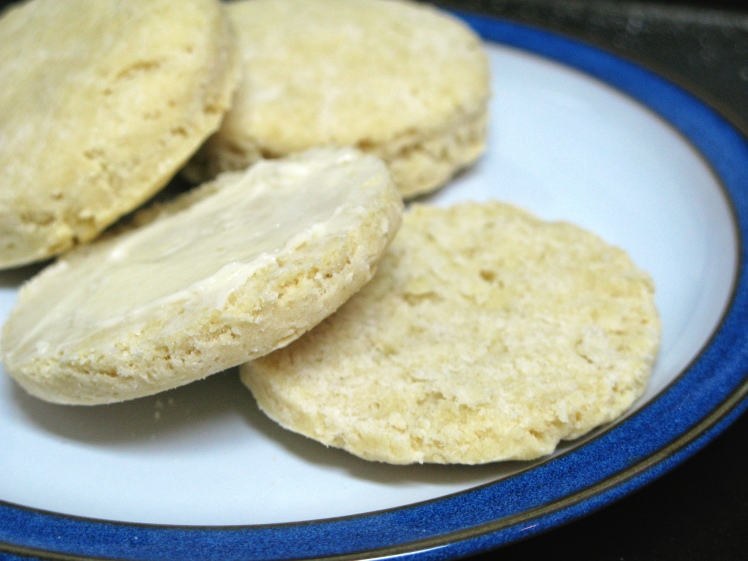 ( Cup measurements added. Normally I do use the scale now to make them since it’s easier to dump all the flours in. For the butter, I measure in grams since I’ve found that my idea of a certain amount of butter, such as 1/4 cup, eyeballed, isn’t always accurate and I don’t wish to mislead anyone who might make the recipe.)

Update June 13, 2012: I made the biscuits with slightly less cornstarch (80 grams) and less butter, which I eyeballed the amount of (making them again, I’d used around 50 grams, still falling within 1/4 cup) and used 1 cup of water. It was a softer dough and made biscuits with a soft interior and a crust. They weren’t tough at all.

These biscuits are one step away from being vegetarian or vegan! Just replace the butter with Earth Balance and you’re set.

Preheat oven to 425º. Line a baking sheet with parchment paper.

Blend the flours, cornstarch, baking powder, salt (if using), and xanthan gum together in a large bowl until fully mixed. 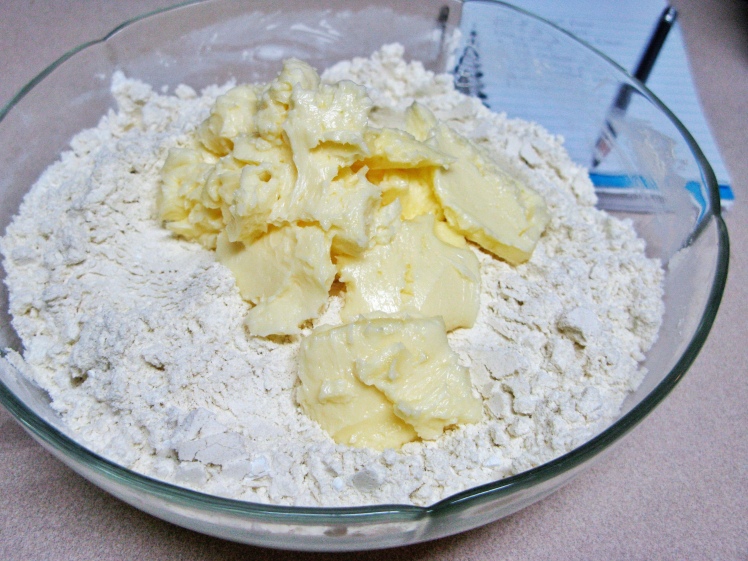 Pour about half the amount of nondairy milk or water into the biscuit mixture and use a spatula or your hands to mix the liquid into the dry ingredients. As the dough forms, add a quarter amount of the water left and mix gently. Add the rest of the water as necessary, a little at a time. There may be some dry amount of the biscuit mixture left, add a tiny amount of water to it and work it with your fingers until it’s dough and mix it into the rest of the dough. Form the dough into a ball. 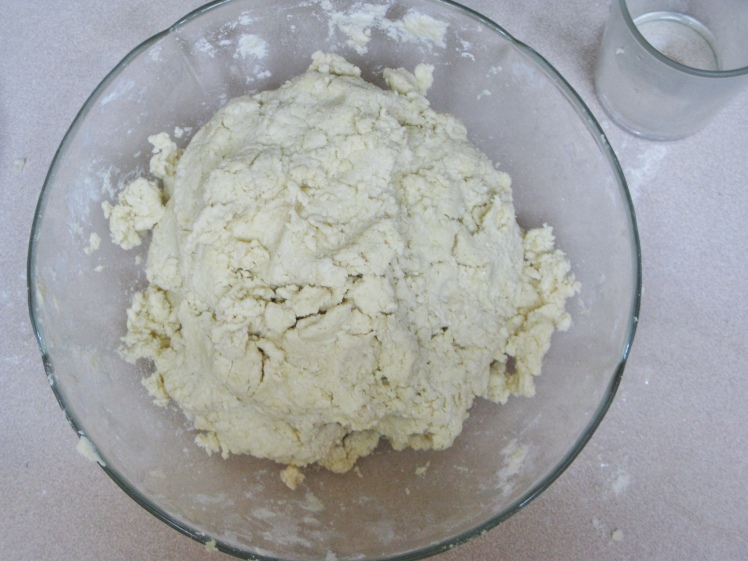 The dough should feel soft and pillow-y, without feeling tacky or sticking to your hands. (If you were mixing the dough with your hands, it will stick to your hands as it’s being formed, but the finished dough should not actually be sticky.)

If using your hands, wash your hands now before rolling out the dough. 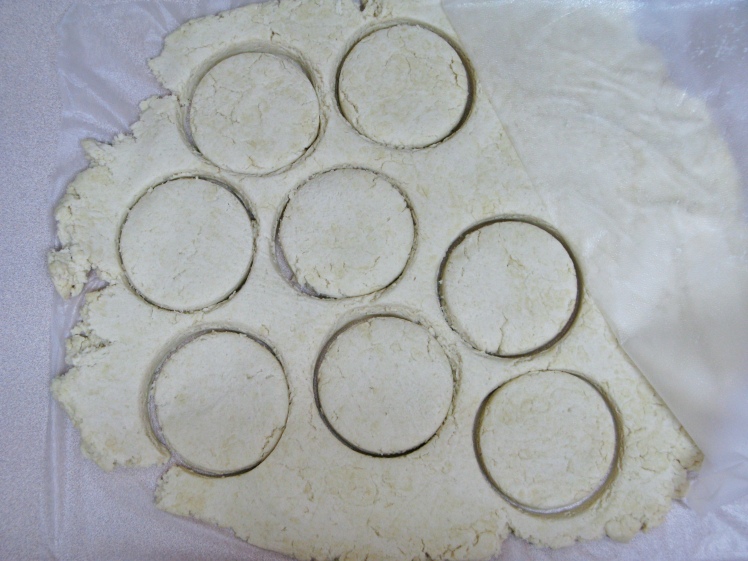 Place the dough between two sheets of plastic wrap and roll out. Cut out biscuits with the mouth of an overturned glass or 2-inch biscuit or cookie cutter, placing on prepared baking sheet and spacing biscuits one inch apart. Gather up dough and repeat until all the dough has been used.

Bake biscuits for 15 minutes. Remove from oven and cool.