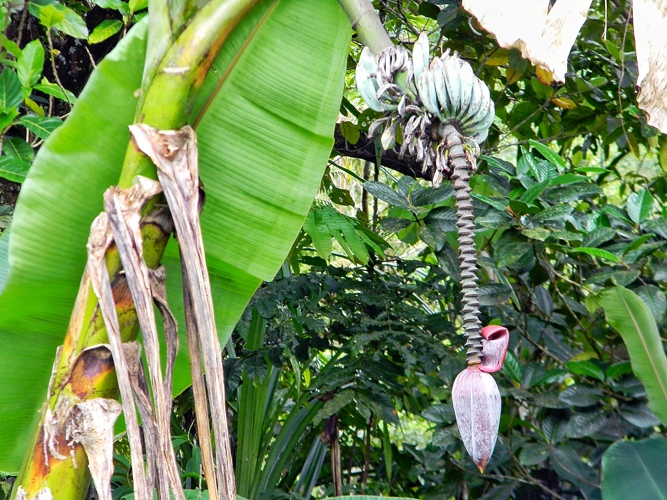 It’s been a week since I’ve come back from Fiji. I came back home with my Dad and sister on Sunday, the day before Halloween. I had a really good time, and it only hit me as soon as I arrived home just how much I missed being in Fiji. I really want to go back again one day!

Since coming home, I’ve edited a handful or so of photos on my iPad, although I haven’t had the time to write a proper post. It’s going to be a bit longer until I’m able to sit down and write, and arrange photos in a coherent fashion, but I thought I would write this in the meantime to let you know I am back and that I’ll be posting again really soon. 🙂 (I’ve posted on Twitter, though I’m aware you all may not be on Twitter or check it.)

The photo above is of a kind of banana tree. Compared to the standard bananas sold in North America, more than one variety of bananas are grown and eaten in Fiji, and are used in the traditional cuisine based on their purpose, such as dessert or a savory dish. Some are also ornamental. Besides the fruit, locals use parts of the banana tree as well for various means. The object hanging from the offshoot is a flower (still unfolding), from which the bananas grow.

If you follow my other blog, trend & chic, you may have seen a couple photos of mine from Fiji in relation to Capture the Word themes (a Flickr group I joined in late September).

Look forward to my big post all about my time in Fiji and expect lots of photos! Coming soon!

2 thoughts on “Back from Fiji!”