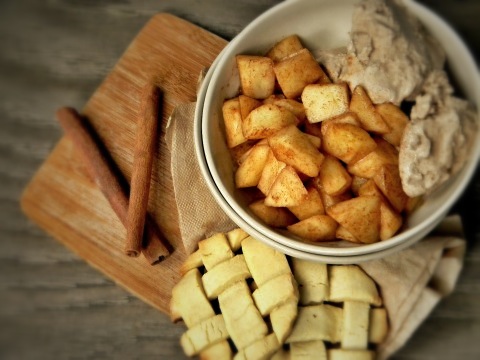 Apple pie is one of the first things autumn beckons, but what if it’s not quite autumn and not quite yet the end of summer? It seems too early to be indulging in a warm piece of apple pie but this deconstructed version transforms the components of what makes apple pie so pleasurable. Stewed apples are served with lattice cookies that stand in as pie crust and a scoop of cinnamon ice cream, reminding us that it it isn’t yet too cold to be still eating ice cream.

September has rolled in and with it warming comfort food, gum boots, and hand-knit scarves, and rain in the air. It doesn’t seem too long ago that it was summer. Technically, it still is but it’s easy to forget when you’re back in school; leaves changing colour and crunching underfoot and the weather becoming cooler and the air crisper in the mornings. Personally, I embrace all seasons and the merits that come with it and I’m thankful to live in a city with a pretty mild climate. It doesn’t even always snow (when I was a kid that was a big deal). I like summer, but I also love bundling up; there’s a sense of cozy comfort about it. (And I’ll tell you now: I have a weakness for scarves, especially those that are knitted. I sometimes even layer them.)

So, not completely giving up on summer but also acknowledging that autumn hasn’t fully settled in, I made this basically deconstructed version of apple pie. The nucleus of this idea started with a dessert called “Apple of My Eye” in Elizabeth Falkner’s Demolition Desserts, a cookbook based upon the success of her bakery Citizen Cake in San Francisco. 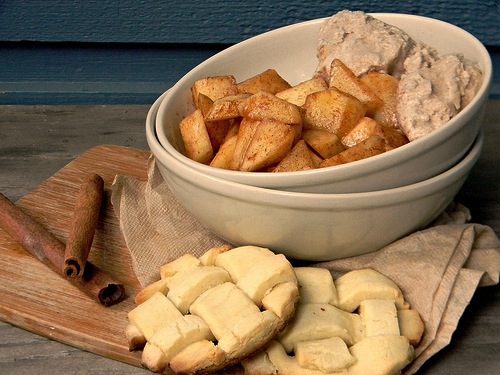 Despite being inspired by her dessert, there is no similarity except for the cinnamon ice cream. Her dessert has tarte tatin apples served with cheddar crumbles, cinnamon ice cream, and a balsamic-apple reduction. Mine is simpler and not as fancy or theatrical – I might even say down-to-earth – with just stewed apples (no sugar; the apples should be sweet enough to take care of themselves) served with lattice cookies – an idea I got from Not Martha – and a dairy-free version of the cinnamon ice cream from Demolition Desserts.

I visited Elizabeth Falkner’s restaurant, Orson, last November en route to Anaheim and I was simply starstruck. It’s named after Orson Welles, probably best known for The War of the Worlds radio broadcast and Citizen Kane . (I had wanted to visit Citizen Cake, but it was relocating at the time.) The funny thing is, I really didn’t realize how much I admired Elizabeth Falkner and her work until that moment. I was in deep awe.

I tell myself that if I ever had the opportunity to meet or bumped into a celebrity, someone I admired, I would recognize them for who they are, but I’d still treat them like people. (I think there’s a kind of blessing when it comes to bumping into a celebrity and you don’t know they’re a celebrity until later. It’s almost comic.) I can only wonder, though, what would have happened if I had seen – let alone met – Ms. Falkner that day. As it was, I was already not too sure what to do with myself at the time.

While all three components are good together, the apples and ice cream alone are good. This is an alternative if you don’t want a cookie or if it’s still too hot to turn on the oven. Ideally, the apples should be served warm.

If you haven’t had cinnamon ice cream or aren’t sure about it, I beg you to try it! It’s right up there with the classic flavours of vanilla and chocolate.

I upped the amount of cinnamon in the ice cream. My Mum’s a major cinnamon lover and it seems that this has influenced my tastebuds as well over the years as I had to tweak the amount of cinnamon in a given recipe, or my Mum would. The ice cream is Philadelphia-style, made without eggs, allowing the cinnamon to come through without being inhibited as is sometimes the case with custard-based ice creams. The creaminess of the coconut milk comes through and you can taste the coconut as well, but it doesn’t distract.

Set up an ice bath by half filling a large bowl or your kitchen sink (make sure it’s been cleaned thoroughly beforehand) with ice and water. Have ready a heatproof container or bowl that fits in the ice bath.

In a saucepan, combine the milk, honey, and cinnamon and place over medium heat. Heat, stirring occasionally, for 6 to 8 minutes, or just until the milk starts to bubble and the honey is dissolved. It may thicken slightly. Add the cream, vanilla, and salt, stir to mix, and pour into the heatproof container and cool in the ice bath. When the mixture is completely cool, cover and refrigerate for at least 1 hour or up to overnight.

Briefly stir the mixture to redistribute any cinnamon that has settled to the bottom (if you chilled it overnight, the coconut milk may have also separated – that’s okay, just stir until its consistency is uniform again), and then pour into an ice cream maker and freeze according to the manufacturer’s directions. (Since this is a small amount of ice cream, you may not even need to turn your ice cream maker on. My ice cream bowl was cold enough for the base to start freezing immediately, and I just stirred it with a spatula.) Transfer to an airtight container with a lid.

Note: In the recipe notes for Demolition Desserts, it says that this ice cream will keep for 1 week but tastes best if served within 3 days. I’m not sure if this is affected by using coconut milk instead of dairy.

Sift the flours, salt, and baking soda together in a medium bowl.

Gradually add the dry ingredients to the wet, a little at a time, mixing well after each addition. As the dough gets thicker, you may wish to use a flexible rubber spatula instead of a whisk.

Divide the dough into balls and chill, wrapped, in the freezer for 1 hour.

Preheat oven to 325°F and line two cookie sheets with parchment paper. Place a ball of dough on the sheets. Lightly dust the chilled dough with a gluten-free flour (I used sweet rice flour). Roll out both balls of dough until 1/4- to 1/2-inch thick. Chill the rolled out dough in the freezer for 15 minutes.

Cut the rolled out dough into strips and carefully move the strips apart. Cookie dough is stiffer than pie dough, so instead of folding back every other strip, lift as carefully as you can, one horizontal strip at a time and place one strip of dough vertically from the second sheet of rolled out dough. Repeat with the other strips. To get the horizontal strips to lay over the vertical strips, draw out the horizontal strips (one at a time) and gently feed through the spaces between your lattice work. Repeat until you have a full lattice. (For a visual reference, I fully recommend checking Not Martha’s instructions with step-by-step photos.)

This is cumbersome, I know, but it wasn’t until I was making this that I realized pie dough really would have been better.

If the strips tear at any point, just gently pinch it back together.

If the dough gets too soft, stick it back in the freezer for a couple of minutes.

Cut out the latticed cookie dough (I used a 2-inch biscuit cutter) and place on one of the baking sheets lined with parchment paper. (The other one will have been cleared with all your lattice work.) Bake cookies for 5 to 10 (check after the 5-minute mark), or until the edges are golden brown. Remove from the oven and cool on the pan.

About 1 tsp. coconut oil, butter, or Earth Balance
1 1/2 pounds apples, quartered, peeled, and chopped
1 tsp. ground cinnamon or more, suited to personal preferences (I often eyeball it, going by smell and colour of the apples and cinnamon mixed together)

Continue cooking until there is a kind of gooey juice and the apples are soft and moist. Remove from heat and add vanilla, if desired.

Place the apples (about 1/4 to 1/2 cup per person) in a bowl or on a plate with a generous scoop(s) of cinnamon ice cream and lattice cookies on the side.