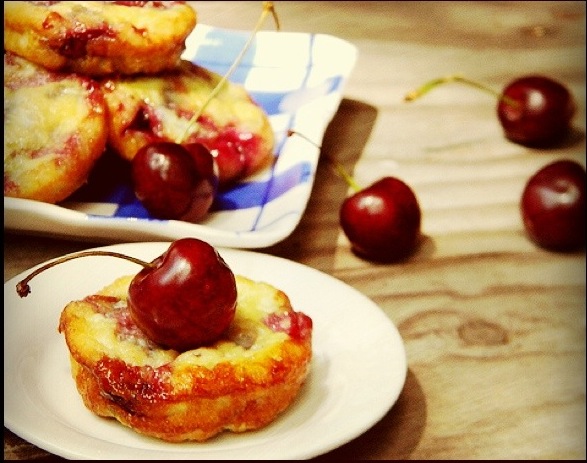 I’ve made flognarde (two versions) but never clafouti, until now. Clafouti is one of those intriguing French desserts in that it defies categorization – is it pudding, is it cake? Is it for breakfast or dessert? (You can have both, in my opinion.) My favourite definition of clafoutis comes from The Patisseries of Paris by Jamie Cahill and Alison Harris, “a cross between a pudding and a cake”.

One thing that never fails, though, is the star of the show: cherries. Classic, traditional clafoutis always have cherries – when other fruit is used it becomes flognarde (flow-nyard) but that distinction seems to be often ignored these days.

When I first read Iris’ Gluten-Free Birthday Cake Challenge, I imagined something simple yet elegant, yet fancy – something that would only be reserved for special occasions, only the best, but as it is life happens. This month has been one hectic one, and it’s about to get even busier (and fun!) leading into this weekend and the following week. Subsequently, a lot of my blogging plans have flown out the window or at least have been postponed until a better date. However, I didn’t let the idea out of my mind – I couldn’t – and, at last, I’ve come up with clafoutis, mini-sized.

They’re not what I suppose would be the first thing to come to mind for a birthday cake but they’re small and can thus be enjoyed in smaller portions than cake would be usually served. Not to mention that there’s no frosting for these beauties. The cherries take care of most of the sweetening in the clafoutis, so it’s low in sugar (of any form, not just refined sugar) and also made with almond flour – so go ahead and spoil yourself!

Preheat oven to 350ºF and grease a 12-cup muffin tin or line with parchment paper cups.*

Pit cherries and chop in quarter pieces. Spoon 7 to 8 cherry quarters per muffin cup. (You’ll have some leftover cherries, which you can snack on. ;))

Beat the eggs and add the almond flour, water, honey, vanilla, and coconut milk, adding one at a time and mixing well after each addition.

Pour batter over cherries, filling each muffin cup about half full. It’s okay if the cherries aren’t completely covered. Bake for 15 to 20 minutes. Cool and serve. Enjoy!

*I’ve seen at some of my local stores, including Whole Foods, that pre-cut parchment paper including cup liners are being sold. If you use parchment paper cup liners, after the cupcakes have baked and cooled the whole cupcake will come away from the paper when you peel it off; there won’t be any crumbs left as is common with standard muffin or cupcake liners.