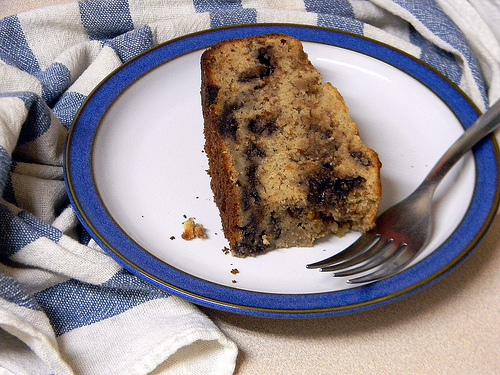 A dear family friend of ours, who also happens to be my brother’s OT (Occupational Therapist) made this cake. Dimity Duckworth is such an outstanding OT and truly wonderful person that she has long since captured a place in the heart of our family and almost everyone she meets, I am sure!  The recipe that she made the cake from calls it bread, but we’re calling it cake. I liked it so much that I simply had to share it with all of you, here. It reminds me of my grandmother’s banana bread, even though peanut butter was never used in her bread (but sometimes there were chocolate chips).

This cake uses quinoa flour, a flour I’ve yet to use in my baking (I have full intentions to, though, since I got that quinoa cookbook!) and she found it a bit heavier than rice flour, which is  what she usually uses but it does add a pleasant, complimentary nuttiness to the cake. Because it’s dense it’s a great snack cake and very satisfying – I cut a slice in half, like in the picture above, and it was enough to still satisfy me.

An interesting fact Dimity told me is that peanut butter isn’t popular to bake with in Australia, so, in her words, she’s really into using it. Since she mentioned it, it has struck me that I have not seen the PB in the Donna Hay magazine or her cookbooks that I’ve borrowed from the library. Is baking with peanut butter very (North) American? (I include North because it seems to be used quite a bit in Canadian baking also.)

The bananas used were very brown and Dimity thinks that this helped with the texture; the mashed bananas also weren’t fully mixed in, so you’d get some banana in a piece of the cake. She also used lactose-free milk as she prefers it over soy milk for baking, but a dairy-free milk of your choice can be used also.

The original recipe used two loaf tins but as she didn’t have two, she used a rectangular dish and, as you can see, the cake still came out well.

Preheat oven to 350°F and grease one 20x20cm rectangular dish.

Mix together the quinoa flour, sugar, baking powder, salt, and cinnamon in a large bowl. In a separate, medium bowl mix the mashed bananas, milk, peanut butter, vanilla, and egg or substitute.

Pour the wet ingredients into the dry and stir until just combined. Add in chocolate chips and mix.

Pour the batter into the greased dish and bake for 45 to 50 minutes or until a toothpick comes out clean. Allow the cake to cool completely before serving.