In this last week of December, if it hasn’t become obvious by Monday’s and yesterday’s posts, respectively, I have taken it upon myself to squeeze in a last few posts before we turn the calendar to 2011. It generally is not usual for me to blog every weekday (a reason why I don’t think I’d be ready to do something like NaBloPoMo or whatever it is just yet). I will still have lots of leftovers – as of now, 298 drafts (and growing); we’ll see how that goes over the next couple years – but these ones that I’m pushing are more or less the ones I want out of the way for the New Year.

That all said, now you’re probably wondering about my choice for today. Don’t be fooled by this shortbread’s appearance: while it may not look the showiest model to ever walk down the culinary catwalk, it will surprise you, if it didn’t already as it was baking, as one of the best shortbreads you’ll have ever tasted – and you’ll be coming back for more. Think of all those times of finding that extraordinary something or that extraordinary somebody underneath a humble exterior.

I’ve made lots of things that aren’t exactly pretty and yet taste fantastic but I haven’t shared them here strictly because of appearances. Will someone really believe that that could be the tastiest thing they’ve had in their life? This is something I’ve been learning and coming to terms with as I blog along – and I’m sure that many other bloggers before me have learned or are still learning: that just because it isn’t pretty, it doesn’t always mean that it isn’t blog worthy.

These shortbread squares I made months ago, some time after I guest posted on Iris’ blog, and are a variation on those lemon squares. I think I would have blogged them sooner but life happened and I was only reminded of them as I was going through my camera, deleting photos, and came across a batch of photos of these bars. There was also a video my brother and I did together of us making the shortbread dough. (See why this is on my list for 2010 and not Next Year?)

They came about after I was asked to make the lemon bars again and, being out of lemon juice, my Mum suggested vanilla extract and almond extract. I was skeptical but I ran with it. I used butter the first time but Earth Balance (I use the soy-free version) also works equally well. Since using the stuff, I love Earth Balance and I love using it, for whatever I’m doing. 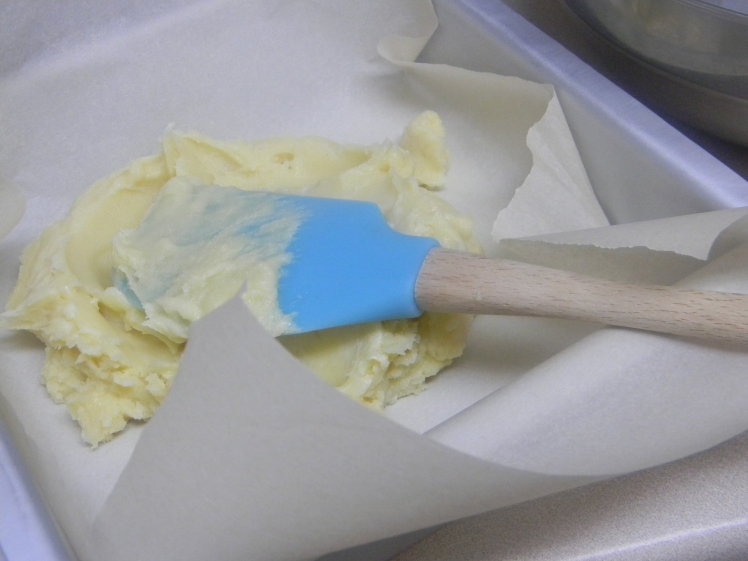 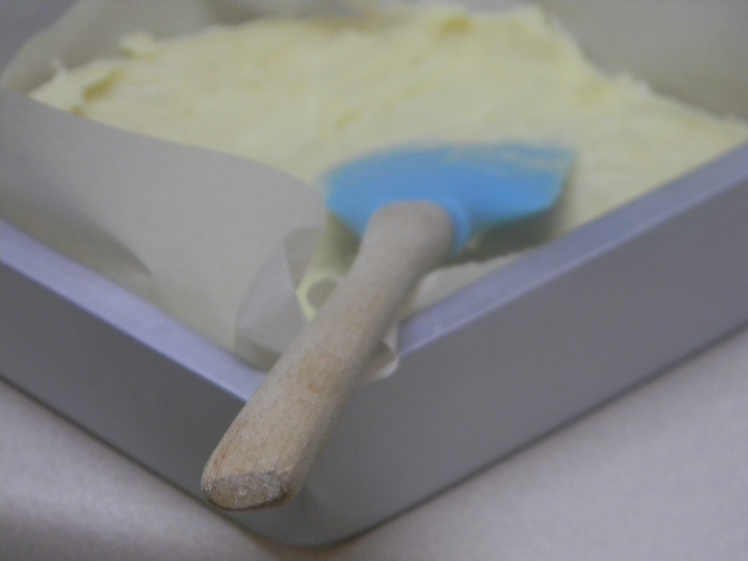 It’s appearance is of the same nature as the lemon bars: the filling sinks a little into the shortbread, and it’s also a bit wet due to the amount of Earth Balance – or butter – so it’s best eaten with a spoon. It doesn’t matter, though, after you taste it. From the first moment I tasted it I knew I’d hit on something good. Everyone loved them. It’s one of those things I wouldn’t feel guilty to eat the whole thing, if I could – or at least half of it – standing over the counter, without sharing. Seriously. (More diligent self-discipline concurs that one square is completely satisfactory while more than one is indulgent.) I don’t think I’ve had something so buttery or so flavourful in ages that I’ve liked immediately in that way. 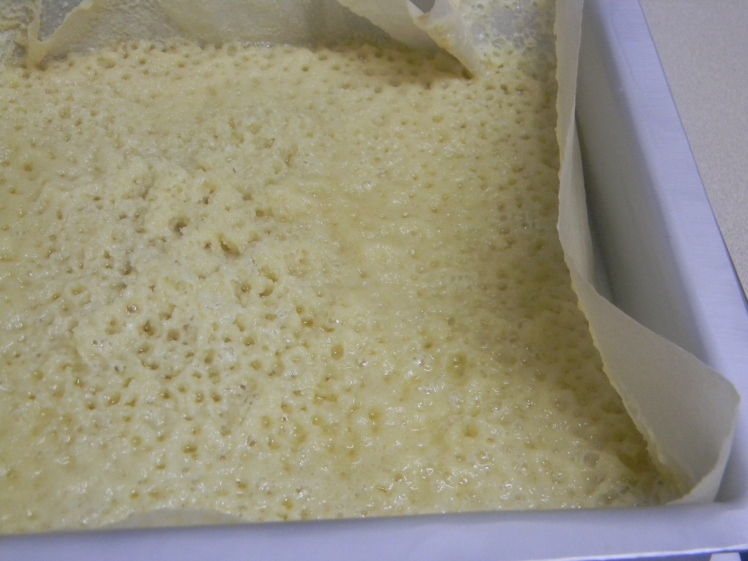 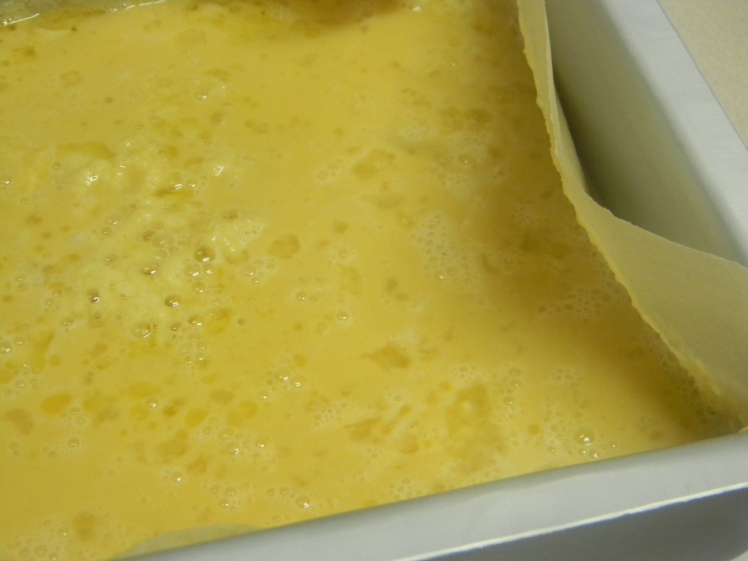 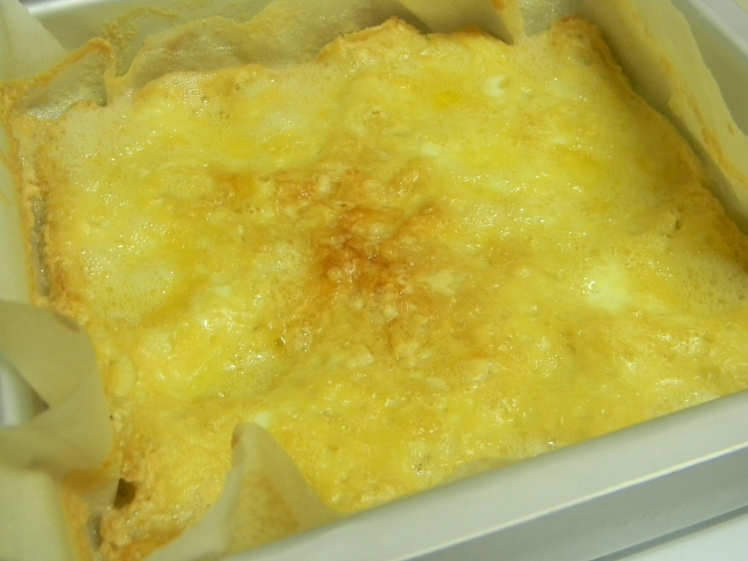 The first time I made them, I told my brother to take a plate of them (four squares) to the table to share. He sat down, made himself comfy, and ate them all. I noticed and said, “Didn’t I tell you to share that plate?”

“I wanted to eat it all myself.”

My brother loves mixing, so for the video he simply mixed the ingredients while I added them and you get to see almost the whole process. Though shot back when these were originally made, it’s my first video in two months! Goodness, I didn’t know it had been that long. It’s also my longest video to date – clocking in at about ten minutes, so I apologize for the length since my videos are usually within the five-minute range. Note to mobile readers: there are YouTube annotations in this video for instructions. You may not be able to see them depending on your mobile device.

Variation on the Lemon Squares

If you do make this with butter, note that the appearance of the shortbread after its initial bake is slightly different from the shortbread made with Earth Balance. The butter-based shortbread acquires a surface with indents and tiny holes (not airholes), and it’s really soft and crumbly. The Earth Balance-based shortbread maintains a smooth-top surface, again very soft – so soft you’ll leave a dent if you touch it with your finger. (Not recommended, by the way – burned myself a few times doing such a foolhardy thing. How long have I been in the kitchen again?) The grease from the butter also goes through the parchment paper, so you’ll still have to clean the pan afterward.

Makes 24 squares, depending on how big or small you cut them

*Ideally it should be the same consistency as the Earth Balance spread, which is solid but soft enough to spread. Not extremely soft like it’s been sitting out on the counter all day.

Shortbread: Mix the Earth Balance or butter with the flours, gums, and salt (if using). Keep mixing as it forms balls to eventually changing into a pliable dough. If you mix longer, it will transition to a more thick, batter-like consistency. Either is fine. Gently mix in the honey. Scape the dough/batter into the prepared pan with a spatula (preferably flexible) and spread out evenly. Bake for 20 minutes.

Filling: While the shortbread is baking, prepare the filling by first stirring the honey and cornstarch together, making sure to mix until there aren’t any lumps. It will reach a pale, creamed consistency. Mix in the eggs, one at a time, mixing well after each addition. Stir in the extracts. (As you see in the video, I forgot about the cornstarch bit: another option is to stir the honey and cornstarch in another vessel, and once it’s that creamy consistency, stir it into the beaten eggs, then add the extracts.)

Assembly: Remove the shortbread from the oven, leaving the oven on. Let cool slightly, from about 5 to 10 minutes. Pour the filling over the shortbread and put back in the oven, baking an additional 20 minutes or until the filling is set. Remove from oven, turn off the heat, and cool sufficiently before cutting and serving. Enjoy!