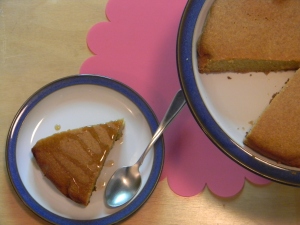 I’m grasping for words here how to begin this post and how to describe this cake. I could just leave you with the recipe. I saw this cake on Sassy Radish and knew I wanted to make it. And, after roughly a couple of weeks, make it I did. It seems that olive oil cakes are making quite the buzz in the food world and I started to get interested in making one after seeing a recipe for one from the new cookbook Good to the Grain. (I’m still waiting to borrow a copy from the library.)

The cake is fairly uncomplicated, although I did change a few things – first and foremost making it gluten-free, and tweaking some of the ingredients because I did not have them on hand. More fairly, I hadn’t paid full attention to the ingredients list and found out, as I was following the recipe instructions, I was out of orange juice and didn’t have a lemon to zest! Perhaps ironically, there was orange juice last night but it was drunk by my little brother and, at that time, I wasn’t thinking of this cake so I didn’t think to save some.

I debated about using natural, fruit juice-sweetened tangerine pop that was in the fridge in place of the orange juice, but instead I grabbed the applesauce and in it went. Lemon extract was added instead of zest and I used the amount that felt right to me; I didn’t Google it.

I don’t know how it compares to it being made with orange juice, but I think the applesauce helped with making the cake moist as the orange juice would have. It’s a pleasantly flavoured cake, with subtle hints of olive but not on the verge of overwhelm. It isn’t a very sweet cake, either, so the mock honey glaze I made for it is perfect, giving it just enough of a sweet note to compliment or it could just be eaten on its own without the glaze.

Preheat oven to 350ºF and line a 9-inch cake pan or springform pan with parchment paper. Mix the dry ingredients to blend. In a separate bowl, whisk the eggs to break up the yolks and mix in the honey. Add the olive oil, whisking until it has thickened. Add the extracts and applesauce. Stir in the blended dry ingredients, mixing until you have a thick, emulsified batter. Pour the batter into the prepared cake pan and bake for 30 to 45 minutes, rotating half way through to ensure even browning. Remove from oven and cool briefly in the pan before transferring cake to a wire rack, letting cool completely. Serve and drizzle slices with the cinnamon honey glaze (recipe follows). Enjoy!

Cream the honey and oil together until starting to thicken and becoming slightly opaque. Add the ground cinnamon, coconut milk, and extracts, mixing after each addition. Make more accordingly or if necessary.