This past week you’ve seen new recipes posted, your comments appearing sooner or later – but, where’s Zoe? Normally she replies in a timely – almost immediate – manner to my comments, you’re saying. (Rest assured, folks, all your comments, questions, have been replied to and answered.)

We went camping! That’s right, my family and I were in the great outdoors last week (if you count today, Sunday, as the first day of the week), with no Internet connection! I made the appropriate arrangements to whip up some stuff ahead of time and schedule the posts so that, while we were away, Z’s Cup of Tea could continue running and, more or less, take care of itself till yours truly came back. 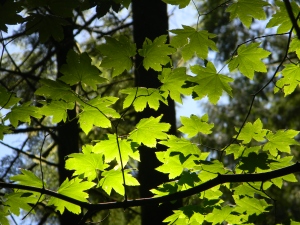 While camping, I took out my camera (yes! a new camera, from my dear grandma, thank you! I’ve secretly named the camera Cherry, after its burgundy red colour.) and just clicked away, resulting in hundreds of photos – most taken by me, but there were some by other family members. I took some food shots, too, but not many – it was a holiday after all, and I was more interested in eating the food this time than focusing a lense on it.

I also had fun using the portable propane stove, boiling water for tea and rice noodles (which we had with tomato sauce), and scrambling eggs with mushroom and green onions, and making cinnamon apples on our last day for breakfast. 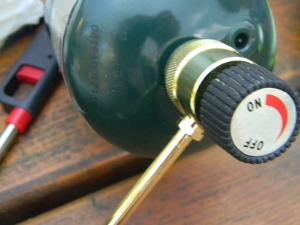 We had a campfire, too, though in all the busyness – and despite preparing posts in advance for while I was away – I didn’t get to making marshmallows before we went, which I was a little disappointed about as I’d really been wanting to test them over the fire and also get a few cool photos of a homemade marshmallow being toasted, plus the possibilities of s’mores and all that marshmallow-y good stuff.

Depending on how long you’ve been hanging out here, you may remember reading my marshmallow disaster back in October of last year. I’ll confess that I steered clear of any more marshmallow-making because all the recipes I found for homemade marshmallows used corn syrup and I began figuring that there was something about the corn syrup or its properties that made honey an unsuitable substitute. I mean, even the Wikipedia article states that marshmallows, “in its modern form, typically consists of sugar or corn syrup, water, gelatin that has been softened in hot water, dextrose, and flavorings, whipped to a spongy consistency.” Often, though, marshmallows are often made with both sugar and corn syrup – most likely, commercial brands use high fructose corn syrup to boot.

The other thing, about making marshmallows at home, is that all the recipes I read and in videos that I watched, use a stand mixer. According to Elizabeth Falkner, it’s impossible to make marshmallows without a stand mixer – she has a vegan marshmallow recipe in her cookbook, Demolition Desserts – but I have to argue, how were marshmallows made before without kitchen gadgets and appliances? Surely by hand. 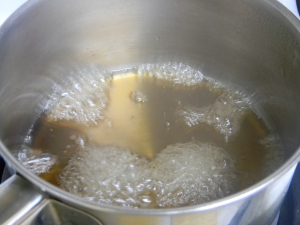 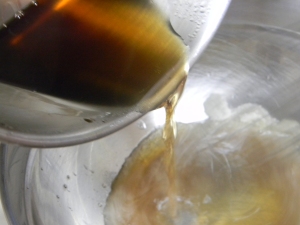 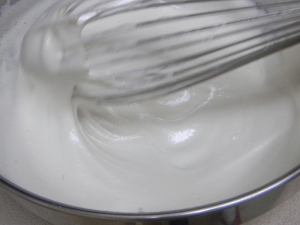 I was eager to give another go making marshmallows when I saw a recipe for homemade marshmallows that were corn syrup free. I had to try it! Instead of corn syrup, agave nectar is used. This recipe also used a stand mixer in preparation but I made it by hand, figuring that if I just mixed like crazy everything would be okay. I told myself that if I can whip egg whites by hand, I can whip up marshmallows by hand, too! See, I’m like that. 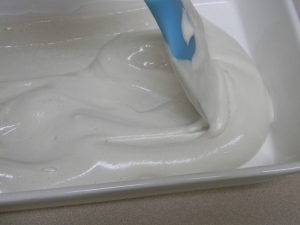 The instructions said it would take about 10 to 15 minutes to whip – it took me an estimated 15 to 30 minutes on the initial try! I’ve since made these marshmallows again and again; each time, both of my arms end up being exhausted (sometimes I start switching between the two) but to me it’s worth it. (An aside: while whipping, I found it helpful to play some loud, kind of fast, music – nothing with a slow tempo; the music had to match the speed I was going at.)

It seems agave nectar does have something over honey in terms of marshmallow-making. I made a half recipe (in case of the risk that it didn’t work out) and that’s what I’m posting, below. If you do have a stand mixer or an electric hand mixer with the whisk attachment, do use it unless you want to rise to the challenge to whip marshmallow by hand? (If so, do tell in the comments!) 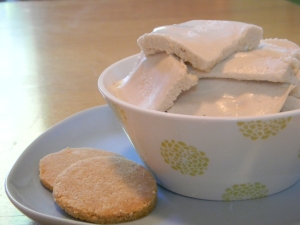 If you’re following the Specific Carbohydrate Diet (SCD) or don’t want to use agave syrup/not available in your area, try making these marshmallows sweetened with honey.

Believe it or not, without the refined sugar, these marshmallows are springier, lighter than air, and you can touch it without it sticking to you like mad and have gooey, sticky strings all over you like Deb of Smitten Kitchen (despite, in retrospect, making for humorous stories). Plus, after it’s done being whipped it’s almost instant marshmallow but one that’s spreadable, like marshmallow fluff.

There is no need to grease the pan or rubber spatula because of the nature of this marshmallow, although you’re welcome still to dust the marshmallows afterward with cornstarch – or confectioner’s sugar if you’re not against it. If you don’t use agave syrup or are following the Specific Carbohydrate Diet, check out these honey-sweetened marshmallows.

Soften gelatin over half of the cold water (1/4 cup) in the chilled mixing bowl. Meanwhile, cook the water, agave nectar, and salt over medium heat, covered, for 3 minutes. Increase heat slightly to bring it to a gentle boil and cook until it reaches soft ball stage or registers 235 to 240ºF on a candy thermometer. Remove from heat.

Pour the syrup slowly into the softened gelatin, whisking gently. When all the syrup is poured in, increase your speed and mix vigorously. It will start frothing and gradually continue to thicken and increase in volume. Keep on mixing until it’s very thick (see photos for reference), at a spreadable consistency similar to smooth, soft peak-stage meringue but thicker and bouncy. Add the vanilla extract and whip for about 1 minute longer.

Scrape the marshmallow into a pan using a rubber spatula (preferably flexible). Spread evenly. It starts setting almost immediately after whipping, so get it into the pan as quickly as possible or it will set in the mixing bowl and be difficult to spread evenly. Cover pan with plastic wrap and wait until fully set (if it’s a hot day, storing it in the fridge may help). Use a clean knife, preferably serrated, (no dusting required) to cut the marshmallow into squares. Enjoy!

35 thoughts on “The Best Homemade Marshmallows, Sugar and Corn Syrup Free! (GFCF) Plus, the Great Outdoors”