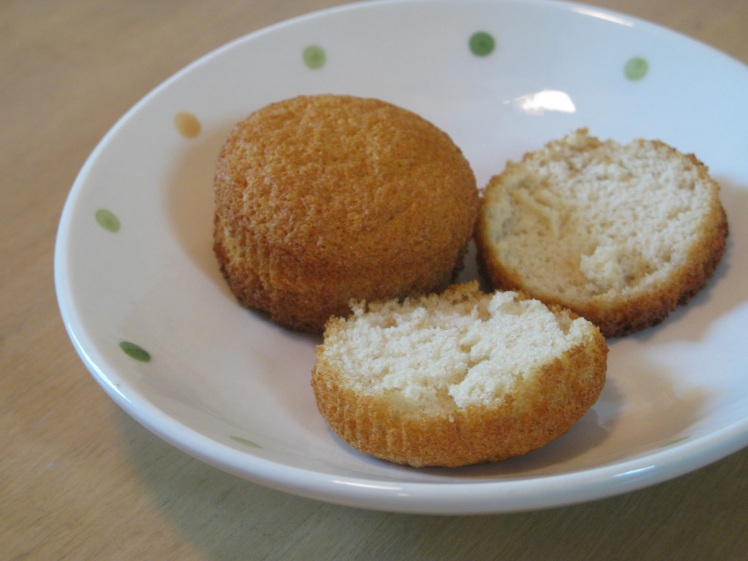 When I was still finding my way around the kitchen and in food, recipes like angel food cake daunted me because of the amount of egg whites used. But as I’ve gone on, I end up having lots of leftover egg whites, in the freezer, at my disposal, from making custard and lemon curds, to name some. I’m not that fond of using pasteurized egg whites that are bought in a little carton at the store since they don’t whip well, for some reason; they only get frothy.

Two weeks I was stuck with the sudden wanting to make angel food cake. After some Googling around, I came across my friend Amy‘s recipe. Almost everything I needed was on hand and I was only delayed in making it by waiting for the egg whites to thaw overnight. I did it all by hand – even whipping the egg whites; it was opportunity to try out my new ball whisk. 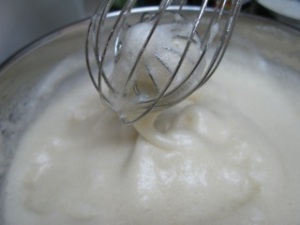 Ever since I made that video for those flourless chocolate cupcakes, I’ve only been whipping egg whites by hand, even when I have a food processor that can do the job for me. But until I’ve worn myself out or my arms decide to give out – whichever comes first – I prefer doing the job myself. Plus, I joke that I’m helping tone my arms when I do it.

I’ve been asked how a ball whisk’s performance compares to a regular balloon whisk. The ball is supposed to help beat more air into the eggs or whatever it is your whipping. I’ve never whipped as much as twelve egg whites all at once by hand, but it seemed that it was faster to whip with the ball whisk, or it could have simply been a result of my practicing whipping egg whites by hand. (It took me about eight minutes. ) As for cleaning, it’s as easy to clean like any other bulbous whisk. After I’m done using it, I rinse it right away or let it soak before anything has a chance to dry.

These really are cupcakes, but I personally refer to them as baby cakes just because of their squat size. I thought they would rise more, but after seeing this recipe on Not Quite Nigella, it seems that with the nature of angel food cake, in cupcake form, you have to fill up to how tall you want the cupcakes to be. I filled mine only halfway full, which is why I’m calling them baby cakes, or half-pint cupcakes.

I made them from previously frozen egg whites, but Amy says that using fresh or previously frozen egg whites work in this recipe. The only things I tweaked a bit was using 1/2 cup white rice flour, instead of 1/4 cup superfine sweet rice flour and 1/4 cup white rice flour as I’m out of the first right now, and substituting the tapioca starch with cornstarch. I also used honey instead of agave nectar.

This was my first time to make a gluten-free cupcake recipe with grains, and I must say it’s one of the best.

Make sure that the egg whites are at room temperature. This will take about an hour.

Divide the batter among the prepared muffin cups and fill up to how tall you want the cupcakes. They will rise but not much. Use a knife to cut through the batter to remove any air bubbles. Bake for 45 minutes or until golden brown and surface springs back when firmly pressed. When the cupcakes are done, remove from the oven and place the muffin tins on a wire rack, leaving to cool completely. (In my experience, it’s easier to peel away the liner from a cupcake after it’s been left to properly cool.) Serve with a berry compote, spread some jam on them, or whatever you like. Enjoy!