Now, of course, what do I do with this pastry? I emailed Helene regarding baking time for the pastry and she was very kind, suggesting blind baking it 10 to 15 minutes, with the pastry weighed down with pie weights such as dried beans. If you don’t have dried beans, uncooked rice could also be used.

When I baked the pastry, it was flaky! So exciting. Everyone could smell it, too; the house was filled with a rich, buttery aroma. 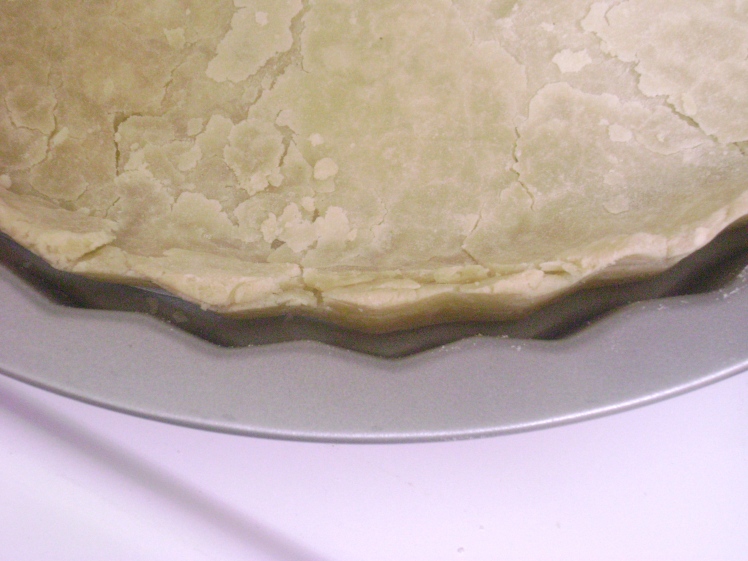 I was intending to make a quiche for Linda’s monthly challenge but my siblings kind of swayed me into making something sweet. A tart. I guess I’m easily swayed. Sometimes. But, it was also a good opportunity as I’ve wanted to make some sort of berry tart, featuring strawberry, since seeing Alice in Wonderland. More Alice-inspired food.

I made a strawberry tart, with a strawberry jam filling. I used 2 pounds of strawberries, and as simple as it sounds – oh, it was turned unnecessarily complicated! The strawberries macerated in there (the pot), surrendering a lot of juice and it took FOREVER to thicken. I confess I did use some cornstarch. After chilling it in the freezer for about 15 minutes, I poured the jam into the pre-baked tart shell and baked it for about 20 minutes. I took it out of the oven and the filling still wasn’t set.

I was getting pretty frustrated – I recently said in a comment that I think my biggest challenge in the kitchen is myself, with my sometimes perfectionist tendencies – and Mum suggested I put it in the fridge. We did that. And, slowly, it gelled. At one point, thinking it was done, it was taken out of the fridge and as we removed the ring (the pan I used had a removable bottom), some of the crust tore away and the filling started dribbling out of one side.

It was a hit: (my sister was smitten enough to actually do a quick little blog about it.) 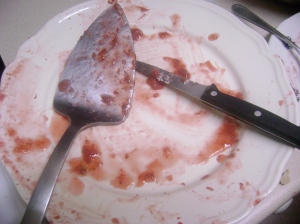 The crust – oh man, it was perfect! We haven’t even had a wheat crust that good. Seriously. And so buttery! It was perfect.

So, not really any recipe, but you can easily make this yourself by just following Helen’s instructions for making the gluten-free puff pastry and blind bake it for 10 or 15 minutes in a preheated oven at 350ºF. Fill the crust with homemade strawberry jam and bake it in a preheated oven at 375ºF for 14 to 20 minutes. Cool before moving to the fridge to chill, until filling is set or overnight. (Although, you can clearly see by the photos that we did not wait that long.) It should be simple. Really.

It took me about a week to make the gluten-free puff pastry, but only because the oven broke down on Tuesday and was fixed today (yay!).