I tried once making SCD-legal marshmallows, around last year, using egg whites, gelatin, and honey; baking for a controlled time as I’m not always sure about the consumption of raw eggs. They were okay, they became firmer after a day in the fridge, but they weren’t really marshmallows. Despite the honey, they tasted very egg-y. As of now, I am yet to make a satisfactory SCD-legal recipe for marshmallows. I don’t quite remember what recipe I used, but it could have been this one from Pecanbread.

Today I tried making marshmallows again, using a recipe from Martha Stewart. This was the recipe:

This recipe is a small exception on this site as it’s the only recipe to use sugar. I learned after buying the sugars that you can make your own confectioner’s sugar (also known as powdered sugar or icing sugar) by grinding granulated sugar in a coffee grinder or with a mortar and pestle. I used honey instead of corn syrup and remembering the 1/2 to 1 cup ratio with honey and sugar (example, replacing 1 cup sugar with 1/2 cup honey – honey is sweeter than sugar), I was extremely wary when making these as I was anxious about it being too sweet and it was also my first time making traditional marshmallows – so my nerves were pretty racked up, and I only used 3/4 cup of honey instead of the full 1 1/4 cups.

I used coconut oil instead of vegetable oil since the only other oil I had was olive and I was pretty sure no one wanted olive oil-flavoured marshmallows. I didn’t quite have an electric mixer, so I alternated between mixing the gelatin and syrup with a whisk by hand and a hand-held electric blender. It didn’t get stiff as the instructions said but it was relatively thick, albeit still liquid, and where can one go wrong when using gelatin? That was my thinking anyway, trying to reassure myself. While waiting for the marshmallow mixture to set for the next three hours, seeing step-by-step marshmallow-making instructions with photos on the Internet didn’t help boost my morale: all the mixtures I saw looked spreadable, like marshmallow cream, and almost all of them used an electric mixer. I had paid precise attention to the instructions, I’d made sure about using a candy thermometer, watching the syrup reach the right temperature – what had gone wrong? Maybe the corn syrup did something the honey did not, or maybe there was some sort of trick that came with using an electric mixer? More than once did I have the fleeting thought of stirring in cornstarch to possibly help thicken it.

By the time an hour and a half had passed, the top had begun to set and it was becoming firm. I was so glad it was working out – especially considering this was my first time making marshmallows proper. When the three hours were finally up, the mixture was firm and it looked like jell-o. It was jell-o. I guess there is something about using an electric mixer, or maybe it was just how I went about mixing the ingredients? I don’t know. I cut it into strips – a sticky job, no pun intended; the oiled knife only worked on the first strip, after that I had to use the icing sugar on it to prevent it from sticking to the stuff. I could lift a strip and it would stretch to a tearing point. 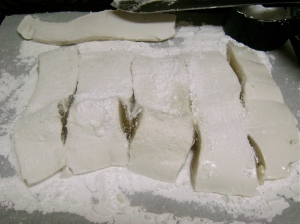 After cutting the strips into squares, I commenced to coat all of them in the confectioner’s sugar. Any worries about them being too sweet were dashed as soon I bit into one: they actually tasted just fine, with a distinctive honey flavour. Only the top was truly white – the bottom and the inside took its colour from the honey, I think.

For my first time, even though the recipe didn’t turn out as marshmallows should be, at least they were a tad more successful than my SCD ones. I probably have to try making them one or two more times – or maybe even more than that, before I get it right. Making marshmallows takes practice.